We’ve got your teams #1 Draft Pick for this season!

The 18th Man Project began in 2014, when the AAA Oakville Rangers partnered with One4Another International to provide an essential surgery for a patient named, Michael. The team funded his surgical care and took Michael on as an honorary team member. It was such a positive experience for the team that the coach began referring to it as the 18th Man Project – as there is 17 players on a hockey team.

Since then, dozens of both boys and girls teams from all over including: Oakville, Guelph, Waterloo, Cambridge, Quinte, York Mills, and South Delta (BC) have participated in the 18th Man Project or 18th Girl Project, and have taken on a Ugandan child in need of surgery as the 18th player on their roster.

Over the years this team initiative has spread from hockey to many other sports, where there aren’t necessarily 17 athletes. As a result we’re changing our initiative name from 18th Man/Girl Project to #1 Draft Pick!

You can sign up with us to have your team (any sport) or group (great to do with youth groups, classes, coworkers, etc.) get matched with a child and we’ll facilitate the relationship between your team or group and a child in need of treatment. Consider involving your baseball, volleyball, or soccer team today!

When it is divided amongst all team members it becomes a very manageable amount to either fundraise or donate but the impact that the team gets to be a part of is life-changing.

Download this infographic and use it to get your team involved!

“We love participating in the 18th Man Project! It is such a great way for the kids to learn how help a child their own age who does not enjoy the same health or health care system that they have.”

“Easily the best thing that came out of our years of minor hockey.”

Other than the 5 most common conditions already presented we treat a variety of surgical problems including omphalocele’s, bowlegs, tumor removal, knock knees, hypospadias, contractures, and amputations. Here are a few before and after shots of some of these conditions.

Osteomyelitis is an infection of the bone and usually occurs in the long bones (humerus, femur, tibia). It is a common condition for children in Uganda and is caused by factors related to poverty such as lack of access to basic health care (antibiotics), poor nutrition, and poor immunity. Once past the acute phase of infection, it is very difficult to treat without surgical intervention. Dead pieces of bone and pus need to be removed and the site needs to be cleaned along with a strong course of antibiotics. Children with chronic osteomyelitis suffer from fevers, pain, general unwellness, and the discharge site is often malodourous. Eventually, once the bone has deteriorated enough they can sustain a pathological fracture, the limb becomes unusable and even more difficult to treat.

Before (Malunion of an old fracture)

Children get into accidents and sustain fractures every day in Uganda. The most common cause of fractures is being hit by vehicles on the roads. Fractures, that require medical attention, are often treated in the village setting by traditional healers or bone setters who often complicate the healing process. The boy above is an example of a child who broke his femur falling out of a tree and was then treated by a local bone setter. The broken femur, not being properly set, formed a malunion so that eventually he could not longer walk properly due to constant pain. His bone needed to be rebroken, set properly, and plated. Children can spend the rest of their lives with a disability due to poorly managed fractures given the unaffordability of surgical care. One4Another exists to serve children who have fractures and traumas that need quality surgical care so that they can get back on their feet.

Given that fractures are usually caused by accidents families have no way of preparing for the costs involved. After seeking help in hospitals they can leave dejected with their child to try local options in the village setting. We want to prevent lifetimes of disability through surgical care for these kids.

Hernias are one of the most common surgical conditions amongst children. There are different types but the one that we see the most is inguinal hernias amongst boys. This is as a result of an opening around the virginalis tube failing to close properly prior to birth. The intestines then begin to slide down into the scrotum through that opening. These kids require an operation to close the opening. The surgeon does this by pushing the intestines back up into the abdomenal cavity and then stitching the opening shut. It is a fairly simple and inexpensive operation but prevents considerable discomfort and the possibility of an incarcerated or strangulated hernia which can be life threatening.

1 in 1000 babies born in Uganda is born with a clubfoot. That is the same prevalence as it is in Canada or most other parts of the world. The key difference is that babies in developed countries are treated as soon as they are born through weekly castings (casting phase) and braces (bracing phase) called the Ponseti Method. We use this method of treatment for all babies below 2 years of age. Older children who have been walking on their feet for years often require a surgical intervention to release soft tissues and in some cases fuse the ankle joint.

Clubfoot is a correctable condition yet many kids in Uganda grow up walking on deformed and painful feet due to lack of access to treatment. The average cost to treat babies with clubfeet is $300. Treating children with clubfoot – who are already walking – ranges from $500 to $1000 depending on the age, number of feet, and rigidity. 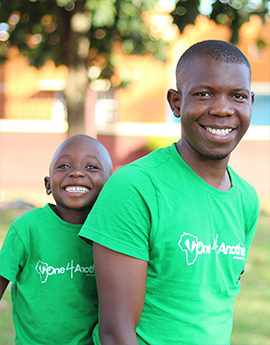 Musa brings kindness and care to the children we serve as he goes about this works of doing patient assessments, compiling progress notes, and keeps patient information up to date.

Musa says, ‘I love working with One4Another International. I believe that children are a gift from God and a source of happiness. There are so many kids born with surgical needs in Uganda. They are referred to as “koloba” (meaning, lame) in their local languages and are considered children of ‘bad luck’. When a child is called this repeatedly it creates stigma. Some of these kids end up on streets as beggars, they are neglected and left out from their families, they can even miss out on going to school. I know these kids must be feeling bad about themselves and that some of them would even prefer not to be born. Am so happy we can bring hope where there doesn’t seem to be any. Many parents whose kids had these conditions now see a second chance for them to live happily in this world. These are parents that come from peasant homes that are only trying to survive one day at a time. Many do not have a genuine source of income which is why they sometimes come with tears of joy as a result of their kids being operated on without being asked for money. After successful surgeries and being discharged these kids become great news to their respective families, villages and schools. May God continue to bless this work!’ 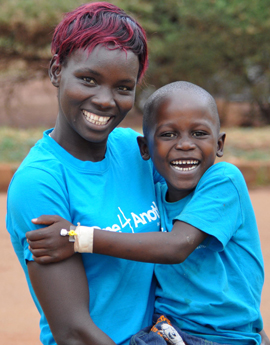 Lillian is a primary school teacher by profession but has joined our team as a recreation and play therapist.

She has an amazing way with children which, for anyone who has struggled to get kids organized and playing well together, is remarkable to watch. At any given time the clinic is now humming with kids playing board games, doing puzzles, colouring, batting balls, singing and dancing, or it is quiet and calm as Lillian talks to the kids about their lives or reads Bible stories.

Lillian adds a much needed element to the program as we seek to make clinic visits not only medical in nature but also therapeutic so that the kids will always remember feeling loved and feeling important. 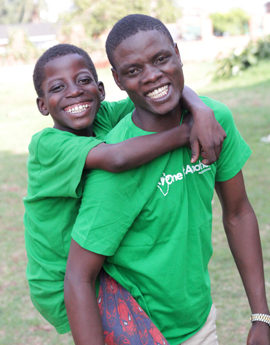 Steven is a natural community builder. He has a background in clinic administration but his passion is linking children in villages with treatment that they otherwise would not receive. He works humbly and tirelessly on behalf of our children and with our community leaders.

Steven says…‘I really love my work, it gives me joy and peace of mind seeing someone who had lost hope start to chase their dreams again after treatment. I believe that giving is far better than receiving, that is why when it comes to do anything for the kids of Uganda I do it unsparingly.’ 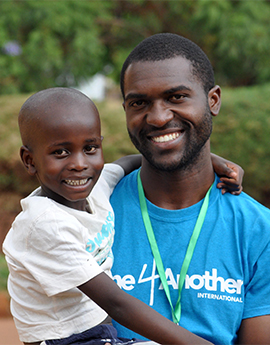 Joel brings enthusiasm and versatility for a role that is near and dear to our hearts and that is ‘follow up care’.

While also soft-spoken Joel has a big heart for the children of Uganda and for service. He has willingly taken on the task of tracking and ensuring that patients are coming for their follow-up appointments. This might sound easy but with kids coming from rural villages there are any number of daily obstacles and his job is anything but easy!

Joel has an IT background but has the heart and gifting of a pastor so he brings a unique set of skills to the job. He is one of the reasons we hope to reach many children in the unserved regions of eastern Uganda.

Joel says…‘I am in love with this work because I feel that this is part of the purpose I was created to do…ministering to the people of God, most especially kids. Showing them love and bringing back hope to the hopeless.’ 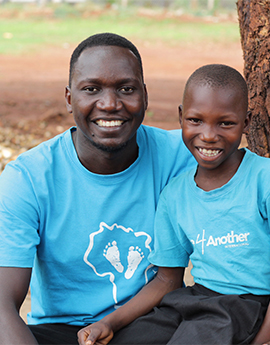 Toni is a program nurse who is helping us expand our capacity in Uganda. He works to get the kids to their appointments and helps facilitate the rehabilitation process which often involves a lot of travel to remote villages. The work is often tedious and progress can be slow which is why the first requirement for hiring our nurses is a genuine love for the children and an affable nature.

Toni says…‘I love this work because it brings us close to the community and shows us where the needs are. The parents are so appreciative after seeing the transformation of their child. We get to see hope return after they’d lost all hope.’ 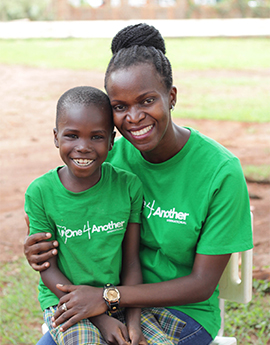 Olivia is our lead nurse and is based in her hometown of Jinja, Uganda. In addition to a nursing degree, she also has a degree in social administration. She coordinates the program on the ground which includes: outreach, assessment, consultation with the surgeons, coordination of medical tests, operation schedules, transportation, and follow-up care.

Olivia is deeply committed to improving the lives of children in her native country. She is at the heart of our program and we give thanks for her every day!

Olivia says…‘It gives me much joy to see a child that has been through pain and misery, due to an illness or deformity, smile and even laugh after treatment. It’s those smiles that motivate me to even work harder so that more kids can experience the same happiness.’